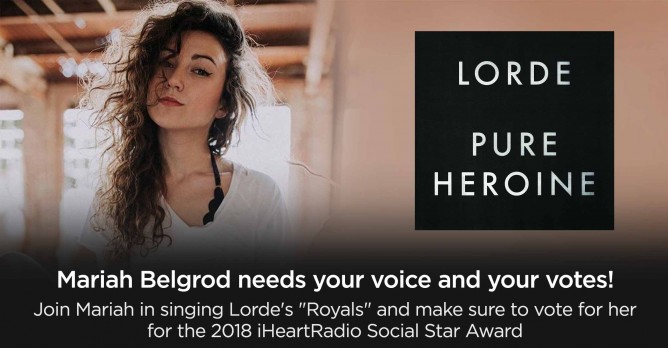 iHeartRadio has been doing their infamous iHeartRadio Music Awards on March 11th making this year their 5th year in a row with artists and performers like Tyler Swift, Ed Sheeran, Charlie Puth & Maroon 5. Last year was their first time having a social star awards with our very own @xDiegoMontana being nominated. This year, the talented Mariah Belgrod was selected to represent Smule.

Mariah has been on Smule for 3 years now and, more importantly, a huge part of our community! Not only is she on the Inspire team & encourages others musically, she also makes her on music (SOON TO BE ON SMULE!)

Let’s get our amazing Smule community to GO VOTE. You can vote once per day until the event 😉

Comments Off on Vote @MariahBelgrod for iHeartRadio Music Awards!