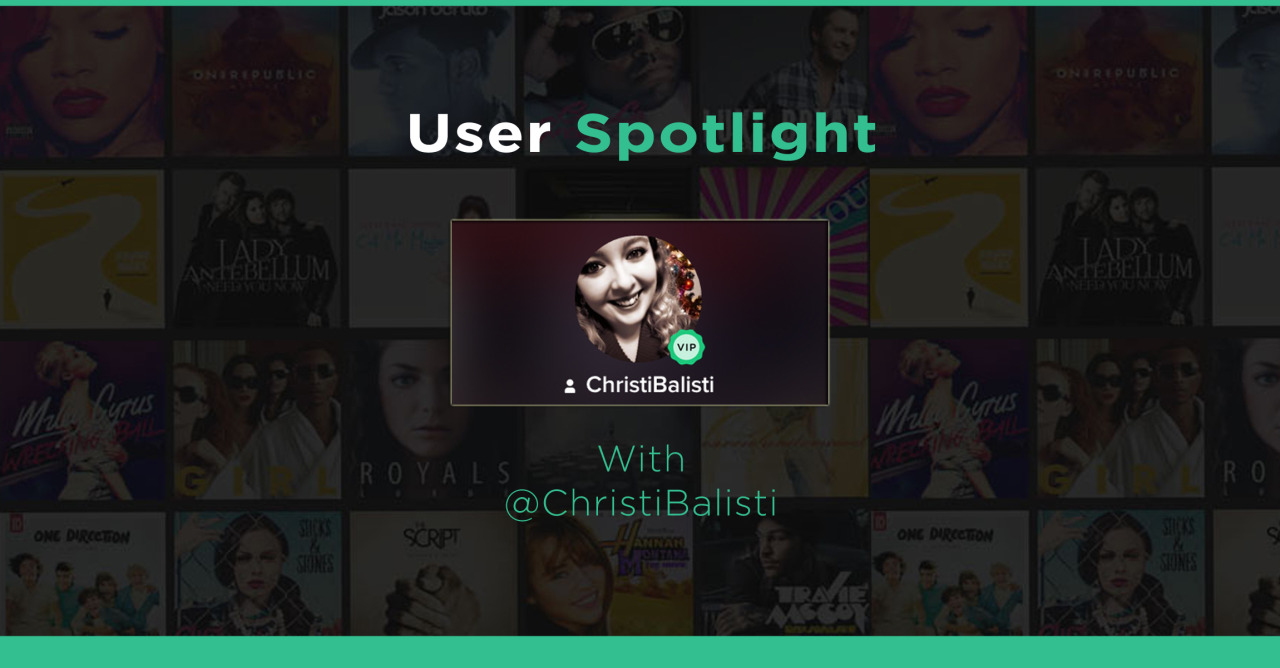 Each Wednesday, we will feature an outstanding member of the Smule community. This week, we wanted to highlight the very talented Christi, who goes by @ChristiBalisti.

Christi has been a member for almost four years and creates many unique, funny videos! She enjoys expressing herself through singing and creating videos in her home. Learn more about Christi below! 🙂

Even though I made it quite recently, one of my favorite performances I have done is “I Dreamed a Dream” from Les Miserables. I have been using the Vine app for almost two years now, so when I saw that video was being added to Sing!, it was like two of my favorite things coming together as one! I decided not only to sing the song but to make the song my own personal little dramatic scene. It was challenging yet super fun!

Well, since I can’t think of one singular cool fact, I’ll give lots of little ones! I have moved around a total of 19 times in my young life of 22 years. I have two welsh corgis named Zeeke & Zoey and a cat named Angel. I once won a photo contest as a toddler by holding a live bunny in a basket and for being the only kid who didn’t smile. My dream is to pursue a career in voice acting, then transitioning into acting and/or working for Disney someday. I had a pet turtle that I found on the side of the road that I named Harold. I’m in an amazing group on Sing! called Disnerds, and each and every person is more talented the last. I love cheese pizza. And, last but not least, I once won a poetry contest and had that poem published in a book. The poem was titled, “If I could rearrange the alphabet, I would put HUGH and I together.” It’s an extremely embarrassing and funny rhyming poem about my shameless love for Hugh Jackman.

What makes you excited to Sing?

In high school, I was constantly performing, whether it be in a play, musical, choir, color guard, or just for my friends and being silly. After high school, I missed that chance to express myself so much! Most of all I missed singing with others and in front of people. What makes me excited to sing is that singing is an expression of yourself that sometimes you cannot show in any other form. It’s poetry and music and emotion and feeling all wrapped into one. And when I’m singing, I feel like I am exactly where I belong. The most amazing thing is that while also enjoying yourself, there’s always that possibility that your song can affect someone – whether it’s a silly song to brighten their day and make them laugh or a smooth song to pull at their heartstrings. You can inspire people whether you know it or not, and that is why I sing. I sing not just for myself but for the hope that my voice may put a smile on someone’s face.

If you could be a superhero, what superpowers would you want?

Wow, that’s a tough question! I’m glad I get to pick more than one! Well, flying obviously is a must. Telekinesis powers would be cool, as in moving things with my mind. Or in other words, “using the Force” (for all my fellow nerds out there 😉 ). And can time travel be a super power? Because then if I accidentally knock over a building while I’m flying and lifting things, I could just go back in time and not knock into it. Gosh, now laser vision sounds cool. Ah! I better stop while I’m ahead!

Comments Off on User Spotlight: ChristBallisti