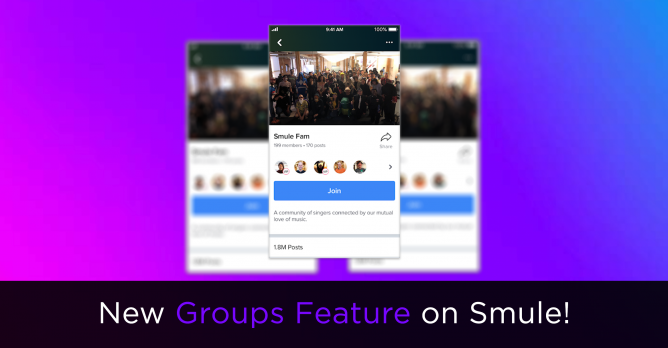 Fun fact: there are now over 500 group on Smule. Seriously! From Disney groups to trap groups, K-pop groups to metal groups and beyond. No matter what they sing, Smule groups are all incredibly inspiring. So many people forming real, meaningful connections―and doing it all on their own steam. We’ve also heard so many stories of people meeting their best friends and partners through Smule groups. Simply amazing.

Smule groups are a huge part of our community. And that’s why we’ve decided to make groups an official part of our app. With our latest app update, groups will be able to create a dedicated homepage on Smule―a place to connect with each other, organize meetups, promote their fave performances, and recruit new members.

This new groups feature is still in the early stages of development. Our public beta kicks off this week on both iOS and our website. Android users, we’re working tirelessly to bring groups to your device as soon as possible!

In the meantime, we’ve love your feedback. Tell us how you like the new feature, any issues you stumble across, and what else you’d like us to add. For all feedback, just use this form.

We can’t wait to hear what you think!

Here’s what one community member, John Kepler, had to say about Smule groups. We couldn’t have said it better. 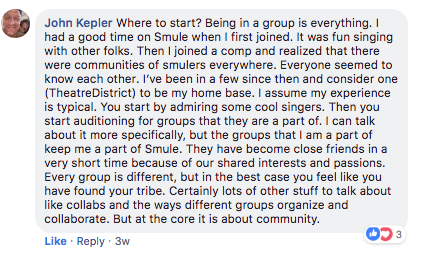 “Being in a group is everything. I had a good time on Smule when I first joined. It was fun singing with other folks. Then I joined a comp and realized that there were communities of smulers everywhere. Everyone seemed to know each other. I’ve been in a few since then and consider one to be my home base. I assume my experience is typical. You start by admiring some cool singers. Then you start auditioning for groups that they are a part of. I can talk about it more specifically, but the groups that I am a part of keep me a part of Smule. They have become close friends in a very short time because of our shared interests and passions. Every group is different, but in the best case you feel like you have found your tribe. Certainly lots of other stuff to talk about like collabs and the ways different groups organize and collaborate. But at the core it is about community.”

Comments Off on Product Update: Smule Groups is Here!